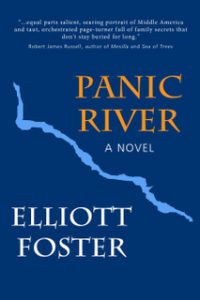 Elliott Foster’s new book Panic River will be released on November 1st.  Elliott is an accomplished public speaker and author of three published books. Each of his events are well-attended, especially in the Wabasha County area where he has a large family and readership. Publisher, Ian Graham Leask of Calumet Editions, also plans to attend and will speak briefly from the perspective of a small press publisher.

Book synopsis:  Corey Fischer, a struggling artist, is in trouble. The sudden death of his estranged father brings Corey down river, to his hometown of Pepin, Wisconsin, where he confronts past and present torments. The taunting inheritance of a pair of hunting rifles sends Corey and his partner Nick to the Fischer family cabin in northern Wisconsin during deer hunting season where the men head into the woods with loaded rifles in hand, and years of resentment simmering beneath the surface. Emotions explode as the couple pursues a wounded eighteen-point buck deep into the woods at dusk where Nick’s betrayals are accidentally revealed. Corey’s panicked, life-defining choices propel him to flee the trail of destruction his life has wrought, and to seek comfort from those who loved him all along.

News at The Wabasha Library